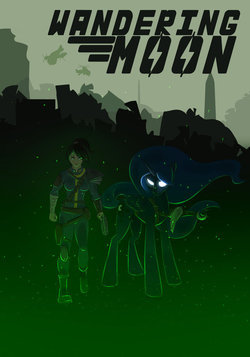 Wandering Moon is a Fallout 3/My Little Pony: Friendship Is Magic Crossover by Ed2481 on Fimfiction.net

What if during the final battle against Celestia, Nightmare Moon was not sent to the moon, but instead to the Capital Wasteland?

Now stranded in a hostile and violent world quite unlike their own, Luna and Nightmare Moon must work together to make their way home and reclaim the throne that is rightfully theirs.

However, the alicorn and her nightmare aren't the only ones searching for something. Joining them on their quest is Sarah Summers, a young woman recently kicked out of Vault 101 who holds a destiny greater than any other in the Wasteland.

Together, a Princess, a Nightmare, and a Wanderer must traverse a violent and unstable Wasteland while dark shadows seek to blot out the wandering moon.