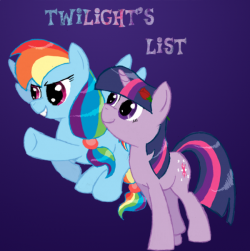 is a My Little Pony: Friendship Is Magic Ship Fic written by kits.

Twilight Sparkle prides herself on following and sticking to her plans, but she isn't as organized as everypony thinks. Her master list, the plan for her life, has an item that she has never been able to check off; and the time has come to fix that. How hard can it be? All she needs to do is go on a date and get a kiss.

Widely considered to be the Trope Codifier of Twilight Sparkle x Rainbow Dash shipfics because it converted large numbers of people to the pairing and highlighted numerous common points between the characters which were widely used by later stories.