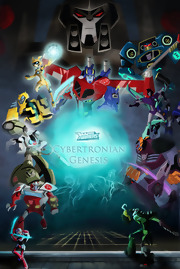 "If that's what your idea of a hero is, then I'll be glad to get rid of the title."
Advertisement:

is a TFA continuation fic detailing the events after Season 3.

Summary on fanfiction.net: Fanfiction picking up where Season 3 left off, dealing with the aftermath of the last great battle and the impact it has on the Autobots, the Decepticons and Cybertron. Carries on into a new story with familiar characters and expanding others.

Finished on June 10, 2010. There is an in-progress sequel called Transformers Animated: The Mercy of Prime

Warning: spoilers for the last season of Transformers Animated!