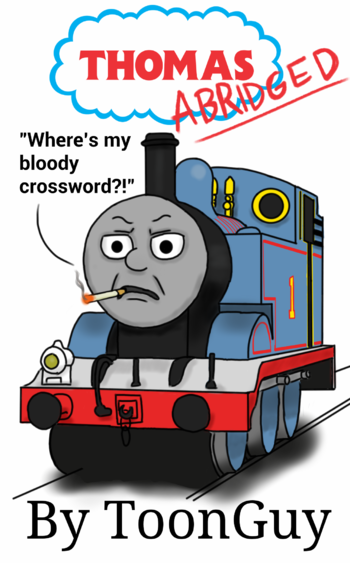 Also, he'll want some more ciggies. He's nearly out and his driver won't give him any.
Thomas is many things. A prat. A lover of many (or so he tells himself every night to try and make himself feel better), but he's also a tank engine, who lives at the Big Station on the Island of Sodor.
Now, many of you might be asking two things. One, what the hell is an engine doing living in a station? And two, what the hell's a sodor?
— Narrator, "Thomas and Gordon"
Advertisement:

is a Thomas & Friends Fan Fiction by ToonGuy

, and as you might expect from the title, it's The Abridged Series of the misadventures of everyone's favourite attention-deficit-stricken tank locomotive.

The Island of Sodor is quite different to the one we're used to on screen; the engines are decidedly more cynical and arrogant, and in some cases more alcoholic, than their TV conterparts. The Fat Controller also has it worse off, having to deal with his unruly engines, his matriarchal and irritable wife, and avoiding an aneurysm.

Along the way, though, a much, much Darker and Edgier subplot emerges in Season 2, which at first concerns the ghost of a background engine and Diesel getting possessed on his first week, and gets more and more significant as the story continues. There is a lot of things featured in the 'fic that you wouldn't ever see on the TV show; including time travel, parallel universes, portals, demonic possessions, and recreational drugs, just to name a few.

Filled to bursting point with British humour and an (un)healthy dosage of the Cerebus Rollercoaster, the longest Thomas 'fic on fanfiction.net (so much that it had to be split into two volumes, maybe even three) is most certainly worth a read.

The author has also written three (as of yet uncomplete) side-'fics; one is ''Now Playing, So Don't Go''

, where a Humanised cast try to put on a production of Peter Pan in a run-down Knapford theatre, the keyword being 'try'. The other is ''Tales From The Abridgement''

, set in the same universe as Abridged and where the cast get up to not-so-wacky shenanigans that more often than not involve alcohol, such as trying to pass the time when the power cuts out in Tidmouth Sheds, and enduring the abject horror that is "Comedy Night with Billy and Charlie". There's also ''TUGS Abridged''