Fanfic / The Return of Chaos 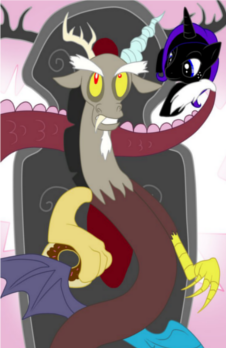 "Isn't it beautiful? We could all indulge in some delicious chaos."
The Return of Chaos is a My Little Pony: Friendship Is Magic fanfiction featuring an Original Character, Darkheart, a black unicorn who has been living in the Canterlot Gardens for years and idolizes Discord to the point of utter insanity.

What makes this fanfiction unique is the fact that the two parts are written almost as if they truly were an episode of the show. They are each meant to amount to a full twenty-two minutes when read aloud, in order to comply to time restraints placed on canonical Friendship is Magic episodes. In addition, the two "fan-episodes" stray far away from the grimdark or sexual territory other Frienship is Magic fanworks may head into.

It also includes a musical number in each episode!

Unfortunately, the fic itself can no longer be found online, likewise with any reposts of it.

The Return of Chaos: Part 1 places most of its focus either on the mane 6 or on Darkheart in their efforts to prevent each other from carrying out their plans, the six's goal being to protect the Elements of Harmony, and Darkheart's to free her master, Discord, from stone. It begins with Twilight Sparkle panicking in preparation for her Midterm Exam before being called to Canterlot for the test itself. Princess Celestia then alerts her that there is a spy in their midst and orders her to bring her friends over as quickly as she can. They then discover that the Elements of Harmony are missing and upon racing out to the Canterlot Gardens, they theorize that Darkheart is behind this. The unicorn, under the effects of a truth serum, then reveals her evil plan to our heroes and the princess before making a hasty escape. Now, the mane 6 must work together and stop her before it is too late - if she really is the threat she claims she is.

If it wasn't obvious enough, Darkheart is revealed to be truly evil and then becomes Discord's loyal servant in the time between Part 1 and Part 2. This script is centered around Discord and his newest creations, the Elements of Disharmony and the ponies that represent those elements, as well as the mane 6 once again, rather than Darkheart. She has been greatly demoted from her role as the major antagonist in the previous script in order to fill a more appropriate role and make way for the real Big Bad of the story arc.

This aforementioned Big Bad then proceeds to cause havoc offscreen, and we meet up with the characters once again in The Return of Chaos: Part 2 after a montage of scenes from the previous "episode," just as it would appear as if it were official. Rainbow Dash, who seems to hate Darkheart the most, is trying to formulate ideas with the group that they could use to dethrone Discord. Celestia soon shows up, which brings Discord's attention to Ponyville. We are then treated to much more chaos, with this "episode" ending in an all-out battle between the Discord/Darkheart team and the mane 6, their pets, the princesses, the Cutie Mark Crusaders, and Big Macintosh.