Fanfic / The Nobody of Ever After High 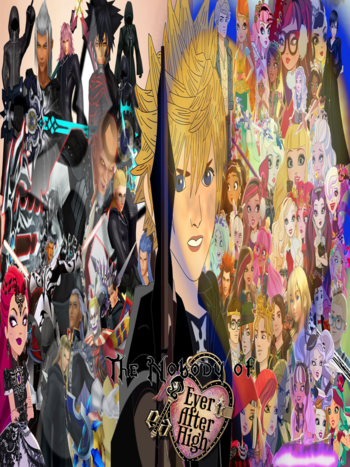 Let Your Heart Guide You To Your Destiny

The Nobody of Ever After High

is a Fan Fic done by author Cloud4012

, crossing over with the Kingdom Hearts Series and Ever After High, with elements from Monster High and other franchises. It started out on January 19th of 2018, and is an ongoing series.

The Synopsis is as follows:

All Roxas wanted was to exist, once he merged with Sora he thought his journey was over. Now he is pulled into a world where the children of fairy tales can choose their destiny. Will this Nobody finally find what he is looking for and what surprises will this new life have for him? Roxas has faced many challenges, but Ever After High is nothing like anything he's ever faced.

The Story serves as an expansion on Roxas as he journeys to Ever After High, and travels through Worlds like Sora to prevent them from falling into darkness. Several Worlds are adapted from Kingdom Hearts III and even Non-Disney. Events at Ever After High are expanded upon, either based from the Specials and Webisodes or all original. It is also an expansion of the Dark Seeker Arc. It is an ongoing series, seventy-six Chapters completed within the first year.