Fan Fic / The Legend of Zelda: Ocarina of Time (DragonRand100) 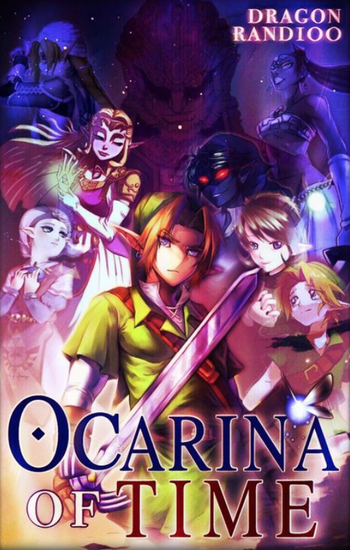 The Legend of Zelda Ocarina of Time Revised-Complete

by DragonRand100-theEagle1989 is a Fan Fic retelling of The Legend of Zelda: The Ocarina of Time. This story faithfully adapts the original source material into a novelization format with some liberties taken. Contains some elements of an alternate universe, some original characters, alterations to canon and exploration of the Zelda Mythos by mixing content from other games into the narrative. At this point the story has been fully revised and completed as the author has since moved on to other projects.

It follows the story of a boy without a fairy named Link who is swept up into a much larger story and conflict than he could have ever imagined. After waking up to a fairy named Navi who tells him that he has to meet the Great Deku Tree, the guardian of the Kokiri forest, Link embarks on a path that will take him far from home, his friends and the only life he has ever known. Determined to reach a young maiden named Princess Zelda and stop the machinations of a Gerudo King from the desert, he will face monsters, navigate dungeons and labyrinths, fight for those he has sworn to protect, face his deepest fears and discover his destiny as the Hero who rode upon the winds of time to become a legend.

Though all the characters featured in Ocarina of Time are present here, how they are presented and their ultimate fates are not restricted to the canon of the games. Complete with violence, grotesque imagery, hints of mature content, epic battles and perilous encounters this story feels like a novel at various points and faithfully captures the experience of the game with respect given to the game's writing, pacing and storytelling.

As of now there are no planned sequels in progress. The story can be viewed at here

An audiobook has been completed and can be seen here

This novelization contains examples of: