"When the draconequus race left the world, one child was left behind." 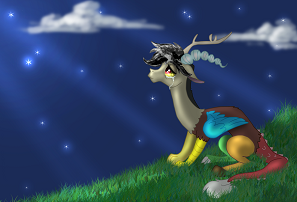 "The Last Draconequus" is a My Little Pony: Friendship Is Magic fanfiction series, written by Alara J. Rogers, that started with a single story of the same name intended to tell the backstory of Discord. Although the original fic remains incomplete, numerous side-stories, sequels and spin-offs by the author (most of them set in the present time of the show), have used the backstory it tells, creating an expansive, fleshed-out universe that includes many alternate continuities and what-if premises. It remains canon-compliant as far as season four (although it ignores the comics).

The main The Last Draconequus continuity comprises the following stories:

The (extremely NSFW) Elements of Opposition series is an alternate continuity that branches off after the Princess Twilight Sparkle Endcaps, and includes:

Additionally, the author uses the backstory from Last Draconequus for several stand-alone fics which are also not a part of the main continuity: