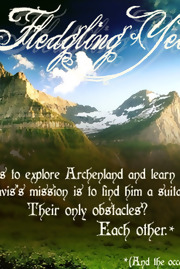 The fanart uploaded as the fic’s official cover art on the host site. (The cutoff text is the fic’s listed summary.)
Advertisement:

A WIP Chronicles of Narnia fanfiction, set a few years after The Horse and His Boy.

Cor, now of age and first in line to the throne of Archenland, must set out on his “fledgling year”, a twelve-month period in which he and a small entourage tour the country in disguise so that Cor can learn about his people. Aravis comes along, ostensibly to find him a suitable bride. Dragons, assassins, political intrigue, and lots of Unresolved Sexual Tension ensue.

Does a remarkable job of balancing the adventure and romance plots and keeping them both well-hooked. Extremely well-written, with solid Worldbuilding, heaps of Character Development, and a good splash of well-placed dry humor.

Be warned, however; the story undergoes both a serious Genre Shift and Cerebus Syndrome around Chapter 50; trigger warnings for a scene of Attempted Rape in Chapter 66 and serious exploration of the resulting trauma.

The Fledgling Year provides examples of: