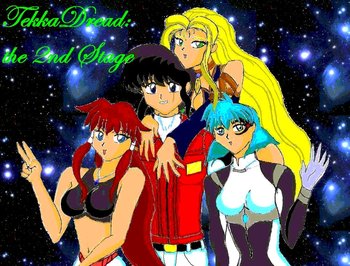 The thing about male/female relationships

is a crossover between Ranma ½ and Van Dread with some Tekkaman Blade by Hung Nguyen. (A.K.A Animeaddiction)

The story of Ranma 1/2 diverges from Jusenkyo, where instead of plunging into Spring of Drowned Girl, Ranma falls into a non-imprinted spring that contained a dormant Tekkapod that crashed there years before by the Radam. The Tekkapod grabbed Ranma and began the slow process of converting him into Tekkaman under the control of the Radam, taking five centuries. Because of this, the events of Ranma 1/2 became irrevocably altered without his presence: Ranma and Genma never arrived to the Tendo Dojo; Genma never arrived due to being killed by the Chinese Amazons and turned into a panda skin rug; Akane gets defeated badly by Kuno, Kodachi, and the Dojo Destroyer to name a few; Picolet Chardin takes Kasumi away to be married off; Akane is kidnapped by Prince Kirin and never returned (and executed by the people of Nekonron for accidentally killing their ruler with her bad cooking). And that was only the prologue.

The real story begins five centuries later when Ranma is released from the Tekkapod with the powers of a Tekkaman, but no Radam warlords. Awakened to a now barren Earth and suffering amnesia due to the pod, Ranma, now Slade, leaves for space to find his place in the universe. Slade eventually arrives to the all male planet of Tarak during his trek across planets, where he gets involved with the story of Vandread.Slade is made part of the crew of the Nirvana as male and female must put aside their differences to fight against a mysterious enemy, the Harvesters. Things are also made interesting as Slade is the only person on board with any knowledge of the supposed "ancient" relationships between man and woman.

The 1st Stage story is completed, and the 2nd Stage Tekkadread: The 2nd Stage

, is near completion. Things have taken a turn for the worst as revelations are revealed, and an even more sinister evil is awakened. The fight for survival of the human race begins...