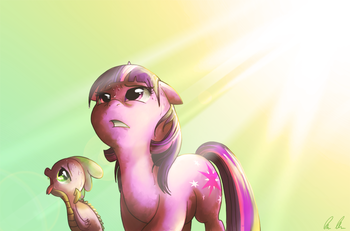 Sunshine and Fire is a My Little Pony: Friendship Is Magic Fan Fic. It starts in normal old Equestria, with an attempt to banish Celestia into another dimension that leads to Twilight, Luna, Celestia, the conspirator and Spike all getting thrown in a different Equestria altogether. They find themselves in a land of eternal day, where the sun beats down mercilessly, and the moon is gone. Each of the heroes (traitor aside) from another realm sets to work to end this oppressive day, and Twilight attempts to recreate history by gathering her old friends to use the Elements of Harmony.

What sets this fic apart from others is the strong storytelling, as well as trying to connect the dots of history and World Building on what a world of eternal day would be like. Throw in some battles, Angst from all the dimension travelers, and of course, The Power of Friendship, and that gives you Sunshine and Fire. Story currently in progress.

on fanfiction.net or here

Tropes associated with this Fanfic: