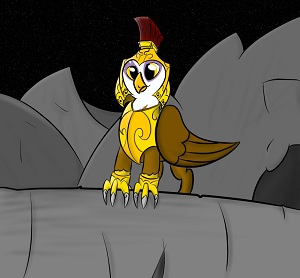 Even a Griffin can make a fine Royal Guard
Advertisement:

A MLP Fanfic by Nicknack, continuing on from Heart of Gold, Feathers of Steel.

Gilda's had it rough for the past few years. She's been kicked out from her tribe, been barely surviving out in the wilderness, and her hopes with reuniting with her old friend have been shot. Unwilling to go through with the ultimanum her father ordained for her, she resigns herself for permanent life of an exile.

But that changes when Captain Iron Bulwark of the Farrington Guard offers her a job, which Glida accepts. After all, it's not like she has anything better to do. How will Gilda adjust to her new life as a Farrington Guard, and how will she come to terms with her feelings for her Captain?

The story took a year-long break, but is finally, finally being restarted, updated, and moved to Fimfiction.Net, along with its prequel. You can find the first part, Summer Days here

, and the prequel page here. Reading the prequel isn't required, but it definitely explains a few things.

This fic was finally completed on May 23, 2013, though NickNack has teased the possibility of future short stories set in the universe.