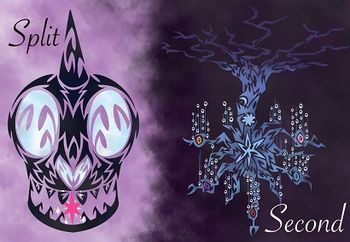 A twist of fate can split a second.
Sparkle couldn't stand the concept of fate. She hated those ponies who spoke of it, as if it were this overarching, controlling force that decided what happened in life. She refused to believe in it, not when it meant that she was fated to kill her parents, or that she was fated to have – accidentally – caused her brother to lose that promotion, or... any of the misfortunes that befell her after that fateful day. Not when her sister...
Advertisement:

and its sequel, Split Second: An Eternity Divided,

are My Little Pony: Friendship Is Magic Fanfiction by wille179. The story tells the tale of Twilight Sparkle, who, during her entrance examination to get in Celestia's School for Gifted Unicorns, ended up breaking time. Twilight becomes a White Mage, an inventor, and the student of Princess Celestia. Meanwhile, Sparkle becomes a Necromancer, kills her parents, creates an undead Dracolich, and has been shunned by society for her powers.

For Want of a Nail hits HARD.

Not to be confused with any other work by that title.

Has an ask blog by the title of Ask Sparkle and Thorn.

Both stories provide examples of:

An Eternity Divided provides examples of: