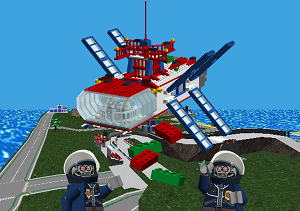 Instructions? Where we're going, we don't need instructions!
"G'day, mates! Thunder's the name, building's the game! And it's time to blow this taco stand!"
—Johnny Thunder

Scene 24: Johnny Thunder Blows This Taco Stand is a Fan Fic by PeabodySam following the adventures of Johnny Thunder during the events of The LEGO Movie.

After being arrested by Lord Business's Robot SWAT Team at Cloud Cuckoo Land, Johnny Thunder breaks free with the help of Chief and plans to rescue the rest of his fellow Master Builders from Octan Tower. However, when he stumbles upon Lord Business's plan to launch a rocket full of Micro Managers, Johnny Thunder must hurry to LEGO Island to stop that rocket from launching!

This tongue-in-cheek script for a supposed Deleted Scene from the original film is written as a loving homage and tribute to fan-favorite LEGO Themes from the late nineties and the Turn of the Millennium including LEGO Adventurers, Rock Raiders, LEGO Alpha Team, and LEGO Island. Much of its humor derives from its self-awareness and it never takes itself seriously as it overdoses on references, over-the-top Product Placement, and notes from the screenwriter about the studio crew.

and ultimately won first place in voting after a close tiebreaker poll. Scene 24 can be read here

, with a mirror on Rock Raiders United here