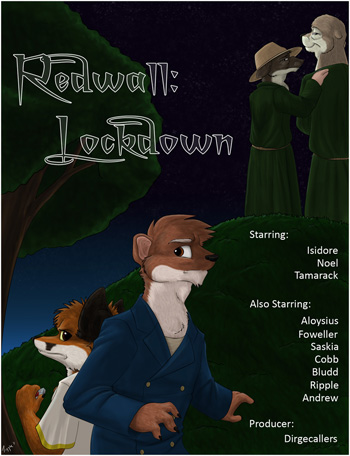 Redwall Lockdown's poster, made by Tamarack's author.
"That afternoon, the Abbot put Redwall on Lockdown. Complete lockdown. No one is to enter the abbey or exit it for a space of exactly four seasons."
—Brother Raimun

Redwall: Lockdown is an Alternate Universe Fic set in Brian Jacques' Redwall canon during the 1600s. After a series of mysterious deaths in the woods around Redwall Abbey, Abbot Carter places the building in lockdown. However, as the body count stacks up inside the Abbey walls, ten beasts must work together to find the true reason behind the killings and uncover the mysterious workings of the Abbey itself.

Redwall: Lockdown is a collaborative survivor writing contest written in 2011. Ten authors were accepted to write the story, one being voted out each week, which eventually leaves the top 3 authors as the winners. This means there a lot of characters are Killed Off for Real. It is still in the process of being finished.

The contest in its incomplete form can be read here.