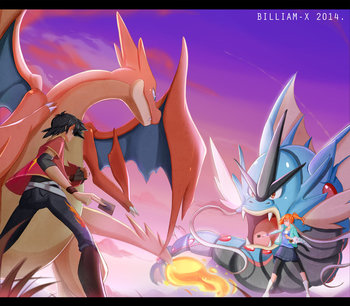 Project YVP (Yu-Gi-Oh! vs Pokémon) is an ongoing fanfic created by by deviantArt user Johnnyd2. Set in an alternate universe merging all of the Yu-Gi-Oh continuities with the anime continuity of the Pokemon World, the two worlds are linked together by an unusual series of events, and it is up to Ash, Misty, Yuma, and other characters, trainer and duelist alike, to find out the truth of the situation.

The story itself is currently 2 chapters in, but already has side stories, vignettes, individual scenes, and other parts of the story.

The story can be found on Johnnyd2's deviantArt page here

. Direct link to chapters 1 and 2 can be found here