Fanfic / Prince of Darkness No More 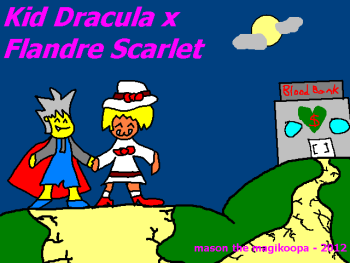 The first and so far only picture relating to the story's primary pairing, courtesy of Mason.

Prince of Darkness No More is a Castlevania/Touhou crossover by SiFi270.

The story begins with Kid Dracula betraying his father Dracula and resolving to kill him again. On the way, he meets Remilia and Flandre Scarlet and soon falls in love with the latter. After Dracula is defeated, the three return to Gensokyo, which has become considerably more peaceful, And the Adventure Continues.

At the start of December 2011, a Christmas Special

was added. Due to issues with time, it was done as a separate story.

The Side Story contains examples of: