Fan Fic / Planet Of The Cats 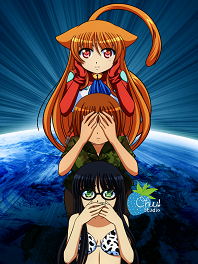 Speak No Evil, See No Evil, Hear No Evil (unless she cheats with those extra ears)

Planet of the Cats

is a Crossover between Planet of the Apes and Cat Planet Cuties series. It primarily features the cast of the former in the setting of the later, and tries very hard not to take itself too seriously.

by the very talented Xenokurisu

Planet of the Cats contains examples of: