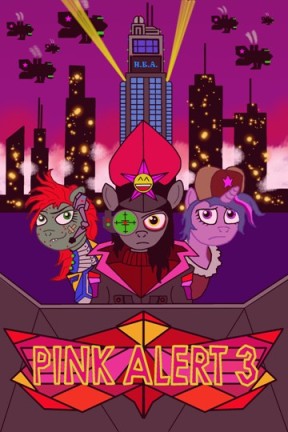 "All Your Equestria Are Belong To Soviet Pony Republic."

Pink Alert 3 is yet another as-yet unfinished crossover fanfic, composed by Deebro. Can be read here

. The story concerns a rather re-envisaged version of Equestria and its neighboring countries, where the Equestrian Kingdom is not quite as helpless or friendly as its canonical counterpart, and military technology is a little more recognizably human. Emphasis on "a little".

Pink Alert features a mostly original cast, and centers around a young Commander of the Soviet Pony Republic, the oddly named Squeezie Heart, who is tasked with the intimidating job of leading the coming invasion of Equestria, or The Holy Equestrian Alliance, as it is called these days. Unfortunately, the famous but ultimately unsuccessful Communist uprising that created the Republic in the first place persuaded the Alicorn Princesses to make a few slight changes to the Equestrian Constitution, among a select few other things. Suffice to say that life in Equestria is far from what it used to be. All in all, it looks like when Squeezie and his Comrades arrive, they will find the Allies to be far from a simple pushover.

Of course, there's also the matter of the The Aquestrian Empire, a high-tech civilization of oriental sea ponies that has lurked beneath the waves of the eastern oceans for thousands of years. Exactly what role they will play in the unfolding conflict is yet to be seen, however, it seems more than likely that they aren't sitting around; they're just waiting for their chance.