Fanfic / Party of None 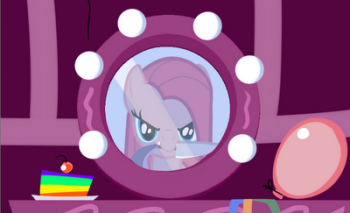 An experiment in What Could Have Been.
"Can grimdark actually be a little funny and not depend on gore and blood?"
— Description of the fanfic

So Pinkie Pie has been rejected by her friends for Gummy the Alligator's after-birthday party, and isn't taking it too well. She holds a party with inanimate objects, smiting her friends, when Rainbow Dash visits to invite Pinkie to Sweet Apple Acres. And when Pinkie refuses, Rainbow Dash will just strong-arm her into going, and everything will be resolved once she gets there. Just like in canon, right?

However, Rainbow Dash lets her guard down for a split second, before finding herself in the mercy of a deranged Pinkie Pie. Tied up with streamers and gagged with a caramel apple, she discovers some nasty truths about Pinkie Pie during her "party," including the fact that the inanimate objects are supposed to be her friends, and are being ripped apart by Pinkie just like what's about to happen to Rainbow Dash! What was assumed to be a short struggle has turned into a life-or-death situation, as Rainbow Dash needs to use both her wits and speed to escape Pinkie's grasp. Reason is not an option.

A collaborative effort between Sparkler and Quill, Party of None explores the alternative to what could have happened in episode "Party of One." It's written with Cupcakes in mind, as it takes special care to avoid any extreme violence.

Party of None contains examples of: