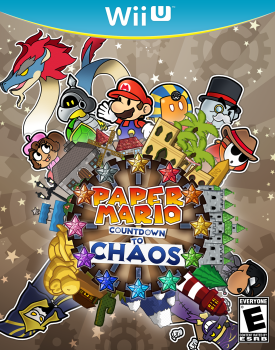 The game's storyline starts out when Mario is invited to Moonview City by famed Chronologist, Professor Koopenstein to test out his newest invention: A Time Machine. After a successful trial run, all the stars on the Moonview City Clock-Tower fade to gray and all the clocks in the Mushroom Kingdom turn to the 12 o'clock position and start counting backwards. After an investigation, this is due to the scattering of the Chrome Stars, which keep the world's time flowing by powering up the Grande Star Clock. However, the Chrome Stars are scattered not only geographically, but also in different periods of time. As such, Mario must recover the Chrome Stars across time to stop the time of the Mushroom World from stopping to a standstill. Like all Paper Mario games, there are eight chapters, but after the final boss there are 4 extra Chapters to explore for the after-game plot.

Information on the game's characters, enemies items and plot can be found in here.