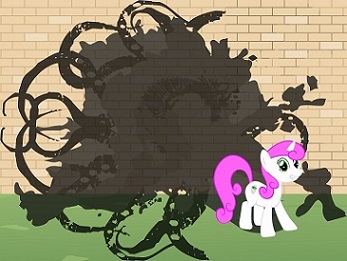 and Oskar Osäker: Your Worst Enemy

are My Little Pony: Friendship Is Magic and [PROTOTYPE] Crossover fanfictions authored by Legionary

It tells the story of a Blacklight Evolved named Oskar Osäker, who gets dropped into Equestria just before the start of season one of My Little Pony: Friendship Is Magic. Quickly assuming the identity of Emerald Gleaner, a unicorn mare created from Rarity and Roseluck's DNA, Oskar infiltrates Ponyville and Equestrian society in an effort to neutralize the Elements of Harmony and become "the top of the food chain."

Of course, this is Equestria, where friendship is magic.