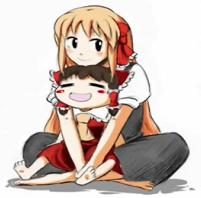 Rumia and young Reimu.
This is a story from when Reimu Hakurei was still small, and the flesh-eating youkai was still big. And also... a story about the unknown miko.

Osana Reimu (otherwise known as "Little Reimu") is an episodic sort-of Film Comic created by Joyful (ジョイフル氏 ) of Nico Nico Douga. Set a few years before the exploits of Reimu Hakurei, this Touhou Fan Fic deals with the lives of a younger Reimu, her mother as the current Hakurei miko, and Rumia - who, going by the popular Fanon that she is Sealed Evil in a Can in present-day Gensokyo, is currently an adult in this timeline. Despite knowing that Rumia is a youkai and that Reimu and her mother are humans, the three of them have a very strong friendship, until one fateful day when the harsh realities of Gensokyo and Rumia's needs as a youkai catch up with them...

The sequel, Touhou Reireimu, returns to the present day where Reimu works as the Hakurei miko. Despite Reimu's usual attitude towards others, she is still considered a friend by her fellow humans and the resident youkai of the Forest of Magic, namely Rumia, who is now the younger, happier youkai we all remember. Things start out relatively normal until Rumia's seal breaks, whereupon the grief-stricken and wildly unstable Youkai of Darkness sets about destroying Gensokyo as an act of revenge.

Other than a few blatant Fanon elements (with the "Rumia being a sealed greater youkai" thing being the worst offender, which is the entire point of the series anyway), Osana Reimu and its sequel are both very faithful to the Touhou canon and its characters, and is arguably one of the most popular Touhou fan stories out there. English translations of both Osana Reimu

Oh yeah, have some tissues handy.

Tropes for the series as a whole: