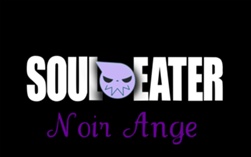 Custom Logos are expensive…
"Still, above all that, you know that all those innocent souls you consumed deserve vengeance."
—Sarah, Chapter 7

As usual, everything takes place in Nevada (for the most part), and starts just a little bit before their trip to Luthe Village. It begins with Maka and Soul finding an injured girl on their doorstep and builds from there. Early on its established that she is directly related to Maka, and that her parents are….well, it should be obvious.

It comprises of two fanfictions fused into one, namely "My Destiny My Fervent Plea

" and "The Spartoi Chronicles

It can be said that is the direct result of throwing in a Tsundere who happens to be the daughter of a long lost older brother of Spirit. In other words it’s a major Mind Screw when it comes to the entire Backstory. Basically, they find this girl in the rain and decide to take her to Shibusen, simple as that. Except it’s not.

Along the way they find out a bunch of things, including how the heck Medusa infiltrated Shibusen. Plus, a boatload of original characters are added, including Witches, half-breeds, regular humans, and Soul’s family even makes a cameo. Some are borrowed from other fanfictions such as Witches Man, Witches

and Soul Eater: My Way

, as well as some Original Characters from this fanfiction having a cameo in works such as “Witches Man, Witches” and “He is the Meister

Even comes with its own unfinished wiki

. But tread with caution on these pages, tropers, spoilers lay ahead for those who dare to unveil them.