Fanfic / No Chance for Fate 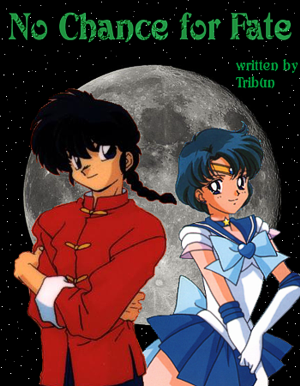 Ami: "Ranma, what was the last thing you learned in your first high school year?"
Ranma: "What high school year? You should know my Pop. Haven't seen a school from inside for over a year now after finishing middle school."
Ami: "Oh my!" (thinking: Houston, we have a problem...)
Advertisement:

No Chance For Fate

is a Sailor Moon and Ranma ½ crossover by Tribun

that purposefully deconstructs, lampshades or averts a number of tropes common to that combination while still proving an interesting and engaging read. The characters slowly but surely develop under the stresses of war while —surprise, surprise— the villains actually show some competence and skill, no longer being the buffoons of canon. It begins with Sailor Pluto.

Pluto has been stuck in a time-loop ever since the first Crystal Tokyo timeline went bad. So bad, in fact, that she broke the Gates of Time with a Dead Scream in her fury, which began the loop of hell. After she's gone insane and back again, she finds a ray of hope. There's a surge of chaos energy in this particular loop, and she takes the chance to reset and rewrite causality in the hopes of a better world. It nearly breaks the universe, but she succeeds with the side effect of several changes. The Senshi are all a year or two older, among numerous other changes. Since everyone involved is still an infant she has almost a decade and a half to put her life together and plan.

One Time Skip later, we meet Ranma Saotome. Being dragged on his way to Soun's house by his father, Genma finds a wallet with two train tickets. Indulging his sloth, the older man lets them take the train, only it doesn't take them to Nerima. Instead, they end up in the middle of Minato ward and run into none other than Nodoka herself, who has changed quite a lot over the past years. The resulting events end with Genma in the dog house and Ranma returning home. Nodoka wants to correct the oversights Genma left in Ranma's education and, knowing that he'll need help passing high school entry exams, ask her best friends daughter to be a tutor. Her name: Ami Mizuno.

This is now a Completed Fic as of January 2020.

The author has also written Going Another Way and The Chosen Six.