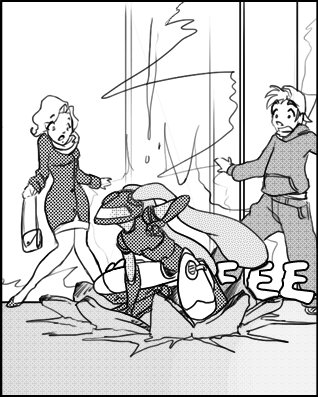 Why yes, that's a bunny robot with two large pink ears that just fell down and cracked the pavement. Same old, same old.
"I had the chance of having a life companion, but fate has taken her from me. Now she has one life and I another, but I will always watch over her."
— Raines W. Xenox, Creation

Next Era, which can be found at the Next Era Network

website, was a fan project based on Mega Man X. It started with merely creating a few Original Characters for fun, but got out of hand quick and ended up with its own webpage with all the stories, a comic and art gallery.

It had a crew of three artists, four and a half writers, a bunch of Swedes and one guy from Thailand. All in all, this was five people.

The final completed story, which ironically takes place long before all other stories involved in the project, was published in 2015. It has been considered inactive since.

Has a (currently non-functional) wiki

For tropes that apply to the specific stories and characters themselves, please refer to the internal Tropes page

The project provides examples of: