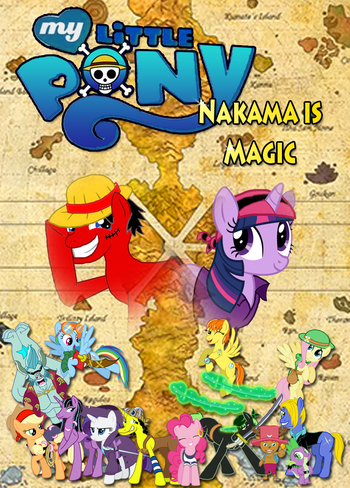 poster created by Moheart7
My Little Pony: Nakama is Magic

is a crossover between My Little Pony: Friendship Is Magic and One Piece created by Hotspot the 626th (also known as Hotspot0626, in some places). Taking place after season one of My Little Pony and the Skypiea arc, it is an adaptation of One Piece with the mane six and Spike joining the Straw Hat crew.

Despite the starting point, this fanfic assumes you already know of a big reveal from later on in One Piece, specifically right before the timeskip. As such, this spoiler will be unmarked.

The author made many changes to the backstories of both universes, most notably regarding Luffy and Twilight's childhoods: Luffy, Ace, and Sabo grew up in Canterlot along with Twilight, who became a fourth sworn sibling to them.

When the Straw Hats fall from Skypiea and land in Ponyville, Twilight and Spike are stoked to see Luffy again. After the Straw Hats help defeat Discord and help Twilight with her anxiety over being tardy with her friendship reports, the mane six and Spike decide to take a vacation and join the pirates on their adventures, starting with Long Ring Long Land.

It ended after the Enies Lobby arc, with an open end inviting other writers to take up sequels. There is at least one author planning a sequel, but nothing has been written yet.

The author has since returned to this universe, beginning writing an interquel called The Friendship Chronicles

, a collection of short stories meant to bridge the gap between the first full story and a potential future sequel.