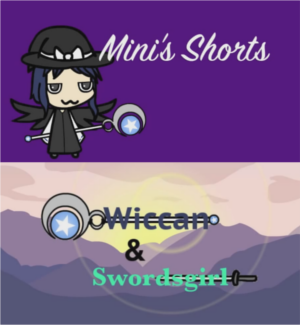 The episodic-turned-mythic adventures of a miniscule wiccan.

The Miniverse is made of two series: Mini's Shorts and Wiccan & Swordsgirl.

Mini's Shorts: The misadventures of half-human, half-bird youkai magician Mini, his human roommate and sword prodigy Megumi, a large cast of original characters, plus the canon Touhou cast. The series begins with a lighthearted and comedic tone, focusing on the antics of the characters, Mini's budding romance with Utsuho, and Megumi's rivalry with Remilia Scarlet, but becomes increasingly complex in terms of its use of characters and plotlines. Watch it here.

Wiccan & Swordsgirl: After the events of Mini's Shorts, Mini begins suffering from headaches, nightmares, and other strange phenomena. Between his usual misadventures, Mini tries to find the source of these strange problems, and it seems the answer may have to do with whether he's more human or more youkai. Like Mini's Shorts, it continues the classic Slice of Life style of the previous series, only now it has a much wider story arc and a more serious tone. Watch it here.

This page is currently under construction. Please help add more tropes if possible.

Tropes from both series: