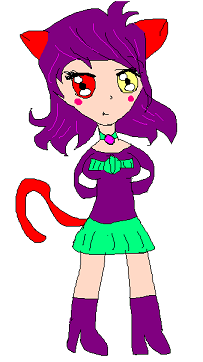 The Heroine of the Series
"ty and xr weren't going to hot because they had hit a rough patch in their relationship because ty had been cheating on xr with nubula's desk (nubula's desk was bit by nos and then it became alive so he looked like ichigo kurosaki but robotic so the desk was pretty hot now ///;;; )"
—Telekonomo, author of Miharu's Story Of Star Comand

A Buzz Lightyear of Star Command fanfic. It's a mishmash of Out of Character characters, a Mary Sue, and romance are all the ingredients you need to create a train wreck on the level of the story of Miharu's Story of Star Comand [sic] written by Telekonomo

This piece of strappingly fine literature starts with many kawaiidesu relationships between canon characters, but when NOS suddenly becomes Japanese and throws a prom, who should show up but amazing kawaiinekodesu demon Miharu?!

Miharu quickly wins over the heart of XR and overthrows Buzz as captain of Team Lightyear. The new team flies off through space in their new ship, Midori (because 42 sucks) to fight Zurg when sudden, unexpected plot twists arive and intigrately and carefully woven relationships surface.