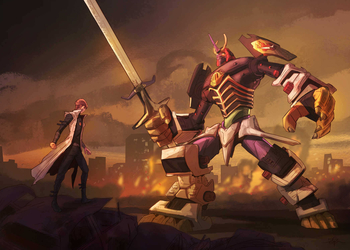 "The fate of our world hinges on those six men... God help us all."
— Optimus Prime

is a fanfic written by Thaeonblade

. It is a Mega Crossover, featuring characters from various franchises, including Neon Genesis Evangelion, Tengen Toppa Gurren Lagann, The Big O, Zoids: New Century, The Vision of Escaflowne and many others.

The story takes place in Angel Groove which is administred by Seto Kaiba and he entrusted Simon the Digger, Roger Smith, Bit Cloud, Van of Fanelia, and Shinji Ikari as the protectors of the city, by blackmailing them into the job. Without means to refuse, they join forces to defend the city, which seems to have more than eyes meet.

The story has thirty chapters so far and also a spin-off, the Parallel Works

, which details the backstory of the plot and many characters. It is drawing to the end of what the author has dubbed "The first season."

Character Sheet in the works: [1]