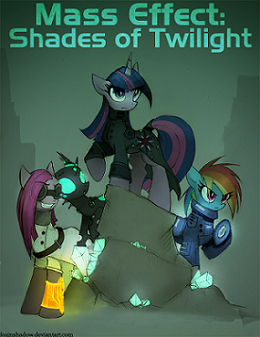 Shortly before his assault on the Collector Base, Commander Shepard is tasked by The Illusive Man to investigate the disappearance of a Cerberus science team who had gone to investigate the origin point of an extremely powerful weapon which had been used against the Reapers 36 million years in the past. Upon following their lead to a system outside of Citadel Space, the Normandy is attacked by automated defenses that separate Shepard and his away team from the Normandy.

After making planetfall and taking cover in an underground facility, Shepard is attacked by robotic tendrils which pull him away from his companions. When he awakens, Shepard finds that he has been transported to the colorful and magical realm of Equestria, and in the process has been transformed into a pony.

After getting to know a bit about this strange land and some of its more illustrious inhabitants, however, Shepard soon finds that he is far from the only thing that isn't what he seems to be. The entire world of Equestria is a virtual reality simulation that has been running for millions of years, and the Equestrians he meets are the descendants of the ancient race of equines who built the facility. As Shepard tries to return to reality, his choices and actions will determine the fate of an entire species who have never known anything about the world outside their simulation.

This is the beginning of Mass Effect 2 DLC: The Equestrian Equation

(author of Doctor Whooves – The Series). The Equestrian Equation is notable for not only bringing the residents of Ponyville into the Mass Effect universe in a manner that operates within the logic of the video games, but also allowed readers to cast their votes on Shepard's actions at the end of each chapter, with the story adjusting to fit the results.

Has a sequel called Shades of Twilight

focusing on the trials of the Equestrian Herd after they are introduced to the larger galaxy. After being removed from the Equestria simulation, the Equestrians are refugees. With only a few hundred of their species left in the universe, it falls upon Madam President Twilight Sparkle to determine how they will create a place for themselves in the galactic community.

Like The Equestrian Equation, readers were able to vote on the decisions that Twilight must make to build her society up from nearly nothing, as well as protecting them from unsavory elements who might try to harm the Herd. All the while, the imminent threat of Reaper invasion hangs over their heads.

"42, please access the Codex for examples pertaining to this series."