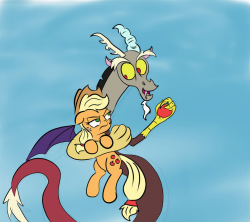 Just because one can pick up an apple, doesn't mean one can pick up an Apple.
The thing about Chaos is that one never knows what to expect. Even then, the God of Chaos himself showing on Applejack's porch and declaring his undying love for her came completely out of left field. Despite the predictable instant rejection, unpredictably Discord remained resolute in romancing the farm pony, and even decided to ask a professional for advice.

Can Princess Cadance teach Discord to change himself to something Applejack will accept? Will Applejack be won over by Discord's unique charm? Will Big Macintosh be able to deliver his apples with the spirit of disharmony tagging along?

This Story demonstrates these tropes: