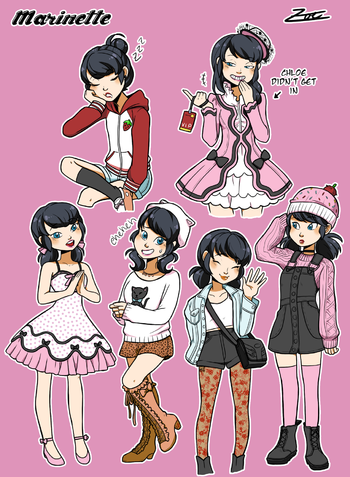 is a Miraculous Ladybug fanfic written by imthepunchlord on tumblr. They co-created the AU along with zoe-oneesama and miraculouscontent.

Marinette is dreading the new school year, another year of having to share a class with her bully, Chloé Bourgeois. However, things look up when she finds out she's actually going to be in Ms. Mendeleiev's class, rather than Bustier's. Hence, no Chloé.

But Chloé is still attending the same school, and refuses to be left behind so easily. Her favorite victim may not be forced to be stuck around her all day anymore, but she's still going to strive to keep her tamped down and properly in her place. And then there's the whole 'suddenly a superhero' thing, with all the responsibilities that entails... and a partner that seems more interested in her than in heroism.

Still, there's new friends to be made, and Marinette's determined to not let anything — or anyone — drag her down anymore. After so long being stifled, it's finally her time to blossom and become more than Chloé's punching bag!

Note: Following a hiatus, the fic was rebooted and rewritten, with chapters slowly being uploaded to replace the original work. The new version is now complete.

Leave for Mendeleiev provides examples of:

The Rewrite
Exclusive to the original
Advertisement: