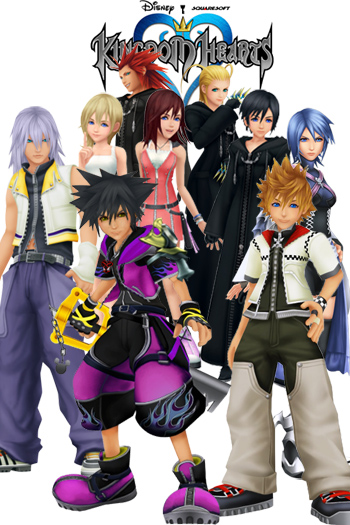 Not shown: MANY OF THEM
Xehanort is alive. Sora is pissed and turned himself into heartless. Roxas is angry and confused. Riku and Kairi? Well... After the discovery a certain Keyblade Master, new journey is started, enemies and friends, old and new will gather. While struggling with their own existence and budding romance, a spark ignite the flames of war once again.
— The opening quote

Written by Zero XSEED, the fanfic

Xehanort has back, the first thing he did is kidnap The Hero Sora and corrupt him... by leaking the memories of his past victim. Unsurprisingly, even a Messianic Archetype still human, and thus, Xehanort succeed... making Sora enraged with him even more than before. Sora realize that his state might be dangerous to Roxas, so he remove his heart.

They met Aqua, and with the Big Bad returned, that means a new adventure will unveil.

Tropes Covered in the story