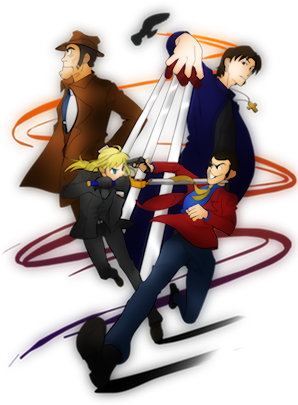 The King of Knights vs. The Emperor of Thieves! Who will win?
"W-who are you?” Kirei finally asked, making the Servant turn to him before grinning.
"Arsène Lupin the Third. Just an unorthodox thief."
Advertisement:

Just an Unorthodox Thief is a Fate/Zero and Lupin the Third crossover by The Infamous Man, the same author behind Fate:Zero Sense and A Different Kind of Truth. It uses the familiar concept of someone summoning a Servant from another series — this time, Kirei Kotomine has accidentally summoned Lupin the Third as Assassin. How will this affect the Fourth Grail War? Read it here

For those unfamiliar with the Fate franchise, seven Heroic Spirits are summoned from the Throne of Heroes, a resting place residing outside of time and space that is reserved for those brave men and women whose deeds have become legends, and are now venerated as eternal guardians of mankind, to fight as Servants in the Holy Grail War. However, being a "hero" isn't strictly required, as some of the summoners discover in this story. Lupin has been dead for ten years. Most of the Lupin cast members have been forced to move on after his death. Some have handled it better than others, whereas some still long for the glory days when their friend/enemy/rival was among the living.

For those unfamiliar with the Lupin franchise, Lupin III is the grandson of the original Gentleman Thief, titular Frenchman Arsène Lupin. Lupin Sr was intelligent, fast, and powerful enough to rival Sherlock Holmes. The grandson is less classy, but even more dangerous. He is normally accompanied by three friends, but this work downplays their influence. He is, however, still chased by a policeman who has dedicated his life to tracking down Lupin, and has collected an impressive arrest record by catching the criminals Lupin has competed with—criminals like the mages Lupin has been summoned to fight. With the power that comes from being a "Heroic Spirit", Lupin seems to be getting even more incredible.