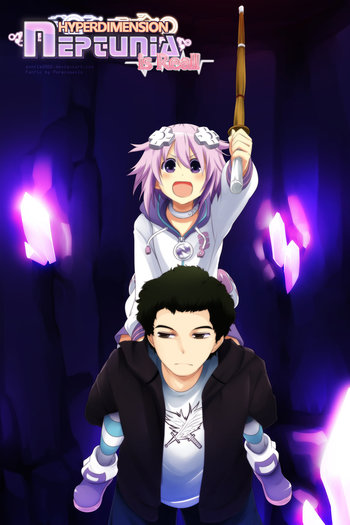 From top to bottom: Neptune and Jacob Winters. Original artwork by annria2002.

is a Neptunia Fan Fic by author Some Random Tosser. It is a Self-Insert Fic of Hyperdimension Neptunia—one that does its damndest to avert and even defy the usual tropes.

The story follows Jacob Winters, a young Australian high schooler on break, whose life takes a turn for the weird when his console—which currently has the Hyperdimension Neptunia game disc loaded up—blows up.

Then a girl named Neptune falls through the roof and second floor.

One chapter later, Jacob finds himself whisked off to the realm of Gamindustri. And he wants to go back home.

Sadly set to end at Chapter 40 (the end of the Leanbox Arc), due to the author's fatigue with it.