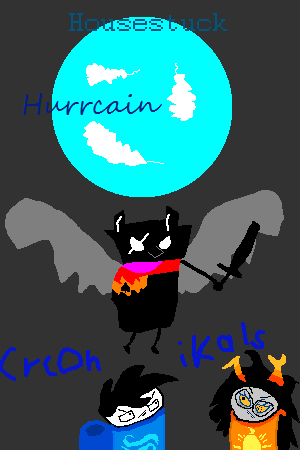 Pictured: John and Vriska underneath a flying Jack Noir and Skaia.
Not pictured: Anything to do with the actual story.
"Yes, but that was only two [members of the Felt]. To overcome and kill the other 13, (not 14 becuz keep Handmaid alive cuxz i like trolls), you must go through a jorney. Well, you have gont through a jorney, but IT HAVE JUST BEGUN. The rest of the jorney will have Pikmin, love n-drangles, tanks, volcainos, genderswaps, tits, brits, mits, hits, and, amung other things, Solid Snake naked."
— Geno, chapter 3.

is a Homestuck fan fic, the seventh fan fic in the Stylistic Suck SBIG series by Great Pikmin Fan, and is a spinoff to Hecksing Ulumate Crconikals. It takes place in the same universe and timeline, but focuses on some of the people who used to be side characters.

John, Rose, and Jade are playing an MMORPG when a strange "white orc" character kills all of their avatars and messes up their gameplay. Irritated (for the second time in Rose and Jade's case), they get Roxy to track down the person responsible and find out that it's Doc Scratch, of the Felt. For some reason. After their first attempt at killing him fails when the entire Felt tries to fight them at once, the eight humans seek help from the trolls, who first train them and then hire them as part of their group. Originally, the trolls called themselves the Zodiacs and the humans the Housestucks, but since the humans make the group not fit the Zodiac theme they rename themselves the Rainbow Crew. From there on out, the story focuses on the Rainbow Crew as they slowly grow in member count and go on various adventures, less than half of them (by chapter count and especially by actual "mission" count) involving the Felt themselves.

Similar to Hecksing Ulumate Crconikals, the main conflict is between two organizations: the Felt and the Rainbow Crew. Completely unlike HUC, however, over half of the fan fic will consist of various side story chapters dedicated to developing the characters and the world. That's right. An attempt at "Character Development" and "World Building" in an intentionally badly done fan fic. This goes about as well as one might expect. Word of God says the relationship between HHC and HUC is similar to that between The Legend of Zelda: Majora's Mask and Ocarina of Time respectively, just done really badly. Also, apparently everyone is a die-hard fan of Futurama.

Unlike a majority of Troll Fics, the spelling and general structure in this (and its preceedor) actually gets better over time, to the point where the later seasons are almost typo-free.

See also Sweet Jade and Hella John, which is basically another, if less direct, attempt to succeed Hecksing Ulumate Crconikals, if being this fic's Spiritual Antithesis.

The fan fic concluded on September 13th of 2015, three years after HHC's beginning and a fourth year after HUC's. The fan fic, as with its preceedor, updated every three days during a "season" (basically arcs) until that season ended, which leads to a break.

Seasons by their chapters:

A spinoff/semi-sequel titled Housestuck: The Split, focused primarily on an alternate timeline created in the events of late Hurrcain, was published on the final day of 2017. It can be read here.

Split is the Grand Finale for a good chunk of the SBIG stories, even those that seem completely unrelated to it at first.

Possible spoilers in the trope descriptions, especially as the story's first three seasons alone contain a bit of Late-Arrival Spoiler! All spoilers dealing with Homestuck canon are unmarked!

Tropes used in this fan fic:

This is a SBURBless/Post-SBURB AU (It says it's the latter but it's really the former), which by itself wipes out the entire first sentence. Doc Scratch is the "evil villain," while Jack isn't even mentioned. John ultimately ends up with Jade while Jade appears to be Johnsexual for the entire story. The narrator and later Kanaya herself comments that she does not want to jump to another relationship after Edward's death, seriously hindering Rose/Kanaya. (Until Kanaya finds news about Alucard's death, and especially after Edward confesses that he was an asshole.) Chapter 3 hinted Terezi/Dave, but then again it also hinted Terezi/Latula and Terezi/Karkat. As for Eridan's "noone" thing... that's jossed as early as chapter 3. By the epilogue, the Rainbow Crew ended up as one polygamous clusterfuck. There was a cop chase in the same chapter, which is perhaps the closest thing the summary got right. What certainly doesn't help in any of this is the fact that the cover (which is also this page's image) seems to agree with at least the God Tier, Jack, Skaia, and maybe John/Vriska parts. In chapter 16, it's openly admitted that both the summary and the cover are flat-out lies.