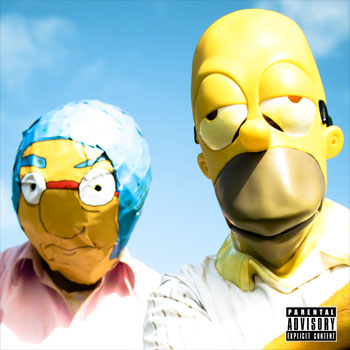 The cover for the soundtrack to the series.
D'h.
— Hommer Simpson

Hommer Simpson is a series of animated shorts made by Hutz (and supposedly uploaded by his friend, Rabbitohs Fan, who is also a mysterious figure) that are loosely based on The Simpsons (and various other TV shows). It began as short, crudely drawn series of skits (generally involving off-kilter interpretations of key Simpsons characters and scenes) and developed into an emotional story of loss, conspiracies and genocide, and a much better drawn one at that - the fifth in the series is actually live-action. The series is still ongoing.

The story mainly revolves around Hommer Simpson, who, after being fired from work for wearing a shirt, is responsible for the death of his baby Maggie. His guilt over this will drive the narrative of the next few episodes. Around this, there are ongoing subplots that all seem related to a power plant nuclear spill which is slowly turning the residents of Springfield into murderous lunatics.

There are also "ads" for the episodes, one of which is a rap video, but most of which involve an in-universe TV show called Seinbluth, which appears to be a mashup of Seinfeld, Arrested Development and about a billion Australian cultural references.

The first episode was released in 2011: https://www.youtube.com/watch?v=0Jh_IxUiW1I