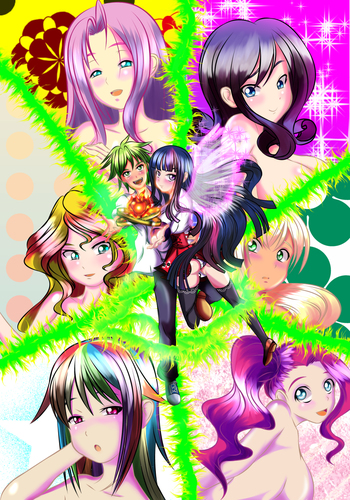 Pictured above are (from left to right): Fluttershy, Rarity, Applejack, Pinkie Pie, Rainbow Dash, Sunset Shimmer, and (in the center) Spike and Twilight Sparkle.

Spike has never had any luck in terms of dating or having a girlfriend. And just when his luck changes it only gets worse when he gets killed on a date, only to be revived with the power of a dragon. With a new power and a group of magical girls to help guide him his new life may very well be better than his old life.

is a fanfic written by Wildcard25

on Fimfiction.Net and cross-posted by ChaosMagemon

on FanFiction.Net that is an adaptation of the plot of High School D×D to My Little Pony: Friendship Is Magic, with all the fanservice that entails. It was first released on April 19th, 2015. It is complete as of August 12, 2018.

It now has a sequel called Highschool Dragon: Harem Legion