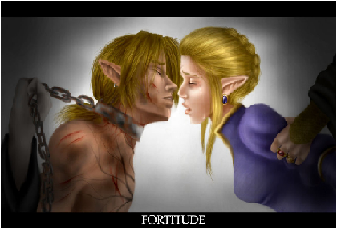 *sniff*
"Whatever obstacles lay ahead, I knew we would find the strength and fortitude to overcome them—as long as we had each other."

Not to be confused with the frosty murder mystery of the same name.

is one of-if not the most- famous Zelda fanfics out there! It is written by Ingie.

The story is set nearly fifteen years after Ocarina of Time, when Link and Zelda sealed Ganondorf away and restored peace to Hyrule. Now married, the two of them lead a happy but stressful life together. Zelda, now Queen and sole ruler of Hyrule, fights to maintain alliances that have weakened since her marriage, while Link, Prince Consort of Hyrule, struggles to gain proper recognition from the High Council so he may one day take the throne at his wife's side.

These issues soon prove to be the least of their troubles, however, when Zelda's former fiancé, King Ashton of the kingdom Vandelius, returns with a vengeance. Aided by mysterious dark forces, Ashton aims to take back not only his former bride but her kingdom as well... note Actual summary from Chapter 1. It is told from Zelda's persepective, sometimes 3rd person as we look in on our villains.

It's currently being revised.