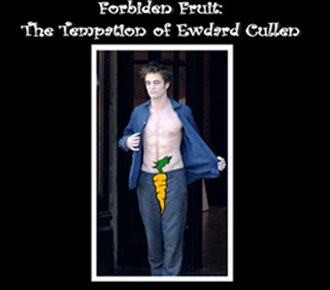 Because when it comes to badfic, there's not much that can outshine the mancarrot.
Advertisement:

Forbiden Fruit: The Tempation Of Edward Cullen — note the spelling mistakes in the title — is a Twilight fanfic written by one 'BeckyMac666', who is widely believed to be Tara Gilesbie in disguise. It's the story of Atlantiana Rebekah Loren, commonly called "Tiana" or "Tiaa", who moves to Forks, Washington, to live with her new foster parents. Tiana is antisocial and psychologically damaged due to a traumatic childhood, which doesn't help when added to her beauty and her first day of school, when she meets Edward "Ewdard" Cullen, who believes she is a vampire. It just goes downhill from there.

.And a dramatic reading of the first chapter can be found here

Compare and contrast Twila The Girl Who Waz In Luv With A Vampyre, a spiritual predecessor of sorts.

Now has a drinking game.

Tropes used in this fanfiction: