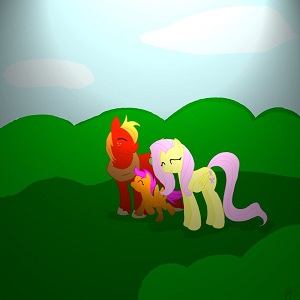 The happiest family in Equestria

is a My Little Pony: Friendship Is Magic fanfic by Alex 12.

The premise is in this AU, after Fluttershy is sent away at the age of 18 by her father for not having her Cutie Mark, she finds it in a way similar to canon, and even then, her father kicks her out due to the Mark's nature. She wanders onto Sweet Apple Acres, and meets Big Macintosh. As he helps her out, he soon falls for her. The two marry, and have a child…Scootaloo.