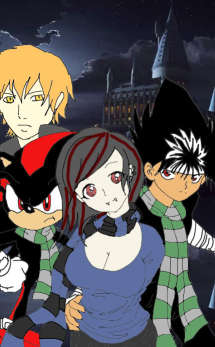 The most effective way to make four fandoms cry in unison.
When Dally Darkblood, a vampire Ravenclaw, goes to Hogwarts, with her best fren, Edward Cullen, and then Hiei, things began to get intresting. Shadow the Hegehog comes and then Dumbleddore turns out to be not so good after ale. With the asstence of close friends and family and a lil wizard magic, Hogwarts will be sale fo the students once more...
Dallas Philpott, "introdiction to the story"

The above summary does not even begin to capture the pure Mind Screw that is Face The Strange (or, as it is spelled officially, "FaCe ThE StRaNgE"), a Troll Fic written in an attempt to write the worst Fan Fic ever. Dally Darkblood is a young lady who happens to be both a vampire and a witch. She is invited to go to Hogwarts along with a certain young man named Edward Cullen who has been having some issues with his girlfriend Bella Swan. On the train, they happen to run into Hiei, who is selling candy to pay for his trip to Hogwarts and on Dally a few times. They also encounter Shadow, the anthropomorphic hedgehog. When they actually get into Hogwarts, Dally and Hiei decide to get it on and use magic to turn their bodily fluids into water in order to avoid impregnating Dally. Little do they know, however, that a very jealous Edward is spying on them, and decides to use his magic to teach Dally a lesson.

And it only gets worse (and weirder) from there.

The even more twisted lovechild of Brewdening Love and My Immortal, Face The Strange is a true test of whether the Internet has truly made a person resistant to terror and having their childhood ruined. If you are feeling brave, you can read it yourself here

(accessed via the Wayback Machine), but be warned that it quickly becomes NSFW.

And now there is a sporking of it here

note Though note that it's far more homophobic and bigoted than the actual fic! And now there's another sporking of it here

Face The Strange contains examples of: