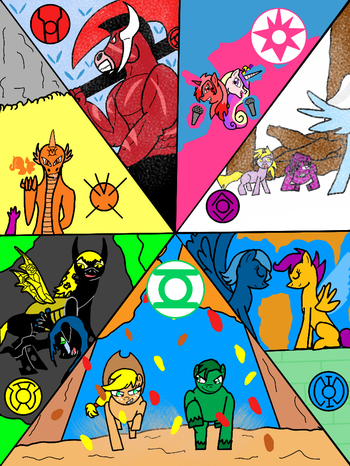 My Little Pony: The Entities of Emotion

is a crossover between My Little Pony: Friendship Is Magic and the Green Lantern series written by Michael_Ravencroft

After being freed from their bonds, the Emotional Entities

seek out a world where they can live in peace and harmony. What better place to live than Equestria, a land which embodies the very powers of will, hope, compassion, and love? But can the entities of the Emotional Spectrum

fit in with the pony races? And can they truly escape the turmoil of the universe they left behind, or will a new War of Light be ignited?

Complete with 30 Chapters, a sequel has already been written. See below.

takes place four years after the Entities of the Emotional Spectrum starting living amongst the ponies of Equestria and have gotten used to mortal life, for the most part, and will soon be spending Hearth's Warming Eve with their respective families and friends.

However, this Hearth's Warming Eve night will be less than joyous. The darkness of the Blackest Night has made it's preparations and is now ready to turn this night of life and happiness, into one of death and tragedy. The Entities and the ponies whom they've sworn to protect will have to stand together if any of them want to see the dawn of Hearth's Warming Day!

"Happy Hearth's Warming to all, and to all, a dead night..."