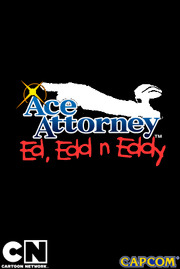 "Is Edd's hat obvious for you? I am not good with drawing. I had terrible grades at school on that regard."
Eddward Wright: Ace Attorney is a crossover between Ed, Edd n Eddy and the Phoenix Wright: Ace Attorney series, created by John the Crossover Master. It can be located on Fan Fiction Dot Net here

and on Archive of Our Own here.

The story is essentially a novelization of the original games, with characters from EEnE added to the mix. Oh yes, and portal guns. Can't forget about portal guns.

According to the author, he planned on this series for quite some time, but he never got along to write the first few chapters, which is why it was not released.

Like in the original games, three fanfictions are currently planned, plus an additional Recursive Fanfiction with Turnabout Storm (proof