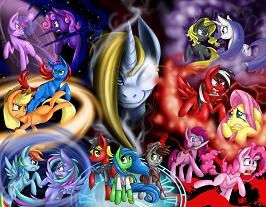 Featured: The Mane Six battling the Mean Six, AKA those guys who don't show up until Chapter 9 and steal the show with every scene they are in.

is a fanfic for My Little Pony: Friendship Is Magic.

The story starts when Twilight Sparkle and her friends are sucked into a portal and warped to another dimension, where they quickly realize they're not in their own Equestria anymore. The new world is similar to ours at first glance, with a giant city populated by hundreds of thousands of ponies. They make new friends along the way — a police officer, Flathoof; a civilian, Lockwood; and a Chronomancer (an obvious reference to Time Lords), Tick Tock — who are determined to help them get back home once they learn that the fact that they're in this new Equestria means that their own is threatened by Discord, whose seal is weakening due to their absence.

But, they make new enemies as well who will stop at nothing to keep Twilight and company from completing their journey, and the world itself from what they've seen is more dangerous than anything they faced back at home. Poverty, violence, corruption, and death are not rare here, and it is going to take all of their efforts to overcome these challenges to get back at home. Challenges range from just getting through New Pandemonium City's corrupt bureaucracy, to dealing with outright hostile terrain (most of it with rather unfortunate names), to fighting against giant-sized monster insects. And that's just the first dozen chapters!

There are also other ponies that don't exactly want to see them make it home and all go to great lengths to keep the Mane Six from their goal. Their primary opponents? A team of suspiciously similar Evil Counterparts — Starlight Shadow, Grayscale Force, Curaçao, Havocwing, Red Velvet, and Insipid — their father Silvertongue, and his personal assassin Shadowstep.

It is now complete with 41 Chapters as of August 30, 2019 after nearly five years without updates.

Eventually, a writer by the name of GM Blackjack was able to write an "alternate finale"

to this series. with the creator's blessing no less!

The writer himself has uploaded all the chapters to Fimfiction

, and notes that GM Blackjack's revival of his story inspired him to put in the work to finish the original himself

An audio play was in production by Bogyle Bronies

, with heavy involvement by the writers. The play has not been updated since 2014, where it stopped on the second chapter.

Now has a prequel

with its own Tropes page!