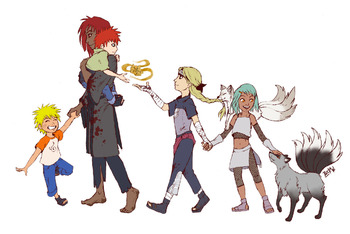 Used with Permission by bompeii

is a Peggy Sue fic by blackkat

and is a Rewrite of her earlier work backslide

The story begins with Naruto, Kurama, and Sakura waiting for warning from their remaining forces for Kaguya’s approach. Exhausted, Kurama is allowed to rest in his mindscape while Naruto makes preparations. When Kurama wakes up, he finds that Naruto locked him in their mindscape with news that Kaguya and Zetsu slaughtered the last camp of the surviving humans, leaving only them left.

With their last hour upon them, Naruto makes one last gamble and asks Kurama to save their future.

Then Kurama wakes up thirty years in the past, wearing Naruto’s body...