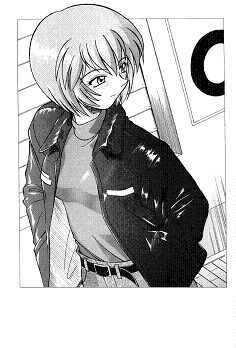 Our Rei wears a leather biker jacket, among many other things...

While Nobody Dies takes a softer Giant Robot anime direction for its reconstruction of Neon Genesis Evangelion, Ayanami: Vengeance

, on the other hand, despite also being a reconstruction (and deconstruction), is a whole different animal.

First conceived in mid 2009 and started in January 2010 by GasmaskAvenger, Ayanami: Vengeance is an Evangelion Alternate Universe Fic that blurs the line between Darker and Edgier and Lighter and Softer with little to no regard towards normal conventions.

Like Nobody Dies, AV crafts a tale that presents a world where Yui Ikari wasn't absorbed into Unit 01 during the contact experiment. Unlike Nobody Dies, Kyoko remains dead, Gendo is a less of a Manipulative Bastard and more on the lines of a Bumbling Dad (with some shady skeletons in the closet) and most importantly...Shinji Ikari is not the lead protagonist.

Instead, AV shines its spotlight on Evangelion Unit 00 pilot Rei Ayanami, who unlike many other incarnations, is actually a (mostly) well-adjusted 13 (later 14) year old girl who aspires to form a heavy metal band and simply go on through life without much trouble, but like all takes on Evangelion, it gets worse.

Those who are interested in an Evangelion fic that really isn't interested in being just a lighter take or 100% grimdark, is unpredictable in its twist and turns and simply wants a more unusual, sometimes surrealistic take on the series, AV is the fic for you.

is currently at a steady 34 chapters (plus a prologue) and according to its author, is still very much far off from its conclusion. The author was under the process of rewriting the early chapters to unify the fic for the sake of consistency but has recently decided to put the reworking project on hold in favor of new material. The reworking process may resume at a later date.

Although a Spacebattles thread

exists, the author considers said thread currently abandoned but may come back to life if demand is given.

There's now a character sheet for the fic's colorful cast. Like this page it's a major work-in-progress. Other important links are at the top of the page for those interested.

This fic contains examples of the following: