Fanfic / As Dreams Are Made On 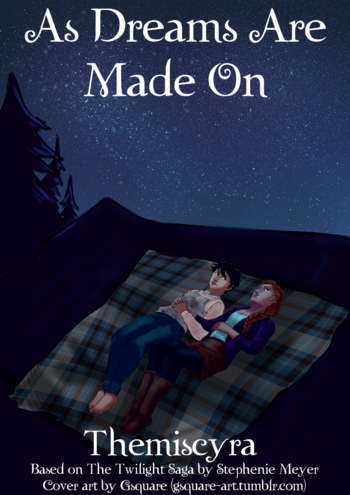 Cover art as used on Archive Of Our Own and Wattpad
What I really couldn’t have foreseen - and should have, considering how much I love to read - is that I would die in a bookstore, having accidentally sent a doorstopper of a hardcover toppling directly onto my own damned head.

Although really: did it have to be the tenth anniversary edition of Twilight?
Advertisement:

Somewhere between an homage and a Take That! to Twilight, As Dreams Are Made On chronicles the life of Cassandra Reardon, a gay/trans neo-pagan and unabashed sci-fi/fantasy fangirl, after she inexplicably lands in the body of a teenaged Bella Swan on the day of her arrival in Forks. Fearing Edward's reaction when she rejects his romantic advances, Cass immediately acts to get the attention of Alice Cullen and try to come up with a plan - only for Alice to form a mating bond on her the moment they meet face-to-face.

This is only the first of many changes to the plot Cass thinks she knows.

Originally published on Archive Of Our Own

starting in October 2015 (unsurprisingly, not long after the tenth anniversary edition of Twilight and the companion novel Life and Death were published), the story has subsequently been crossposted to FanFiction.Net

. The author also maintains a Tumblr

for story notes and commentary.

The story is listed as the first volume in The Tempest Trilogy, and a sequel, Brave New World, has begun as of July 2019, available on AO3

. A series of side stories from the perspective of other characters, grouped under the title These Our Actors, can likewise be found on AO3