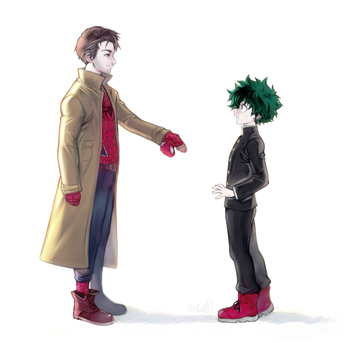 This is the story of how I,
Izuku Midoriya, became Spider-Man.note Original art

and commissioned by Ezra

. Used with permission.
"Do you want to know my story?
Are you sure you want to know?
The tale I'm going to spin isn't for the faint of heart and...
Wait! Wait, don't go!
O-Okay look, this is the first time I've told anybody what happened like this, so please be patient!
Our story begins like a lot of manga and comics do... in middle school."
—The story's opening

Izuku Midoriya thought he was going to die after he was bitten by a strange spider on his way home from school. After waking from a two-day long coma, he's surprised to find that not only is he fine, but he now has biceps and a six pack. Things only get weirder when tiny hairs start growing out of his palms, his brain starts tingling whenever he's in danger, he accidentally destroys his desk and leaps twenty feet in the air.

If that wasn't enough, he inadvertently electrocutes a homeless man in a Spider-Man costume who introduces himself as Peter Parker. Now forced to reevaluate everything he thought was possible, Izuku finds a new mentor and a new path towards his dream of becoming one of the world's greatest Heroes as the spectacular Spider-Man!

is a My Hero Academia/Spider-Man crossover story written by The Infamous Man of Just an Unorthodox Thief and A Different Kind of Truth fame. Taking inspiration from Spider-Man: Into the Spider-Verse, it follows Izuku's road towards becoming his world's version of Spider-Man with Peter Parker as his mentor and all of the repercussions that come with it.

The Fanfiction.net version can be read here